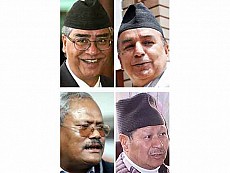 Four political leader won election after 2048 BS. This is a record of winning by democratic competition.

This is a list of candidate who won 5 times.

He had won 5 times from Tanahu

Deuba had won from his home district in all election as well 2070 CA election too.

He won when he was in Congress from begining but he won now from his own new party Madhesi Jana Adhikar Forum Democratic.

But now he won inSunsari-3 but was defeated in Morang-7 by Shekhar Koirala.

He won Continuously in Bhaktapur-1 from the begining.

Candidate who win 5 times continuously
US, EU ambassadors urge Dahal to accept poll results
Can Gagan Thapa be New Prime Minister.
Who will win Nepal Election and what will happen
3332302827